For a more tutorialized explanation of the content described in this article, see Zones on the Hytale Community Wiki.

Original version of the previous image, showing the given name of each zone.

Zones are unique procedurally-generated areas that have sets of similar biomes and challenges to face. Each zone will have a unique set of prefabs, creatures, biomes, and more.[1] Zones contain different biomes, forests, lakes, hills, and ravines, and topographical features like ponds and rocky outcrops.[2] While the names of some zones have been given, they are not yet finalized.[3]

A generated height map from random noise, creating the rocky plateaus of the Howling Sands.

Hytale generates zones using randomly-generated "noise", random numbers generated by the game's generator, to create height maps for the terrain that control the positioning and density of blocks in certain areas of the zone. Noise maps are combined and tweaked to create varied terrain.[4]

After the basic terrain structure is created, different layers are then applied to it. These layers are noise maps that control what types of blocks to generate and where to cluster these blocks. Once the layering step is completed, covers are then added to the terrain. These include environmental details that are dependent on where they are placed in the world, for example shrubbery on the surface and moss underground. Different prefabs are then placed into the world to complete the game's terrain generation.[4]

The Emerald Grove, one of the six zones on Orbis.

Orbis features at least six zones, four of which have been publicly showcased: Emerald Grove, Howling Sands, Borea, Devasted Lands, and two unannounced zones. Each zone has its own set of biomes, coastal features, blocks and other content, such as furniture sets, races, creatures, plants, weather, and geology. Underground areas, including caves and dungeons, also generate differently depending on the zone they generate in. 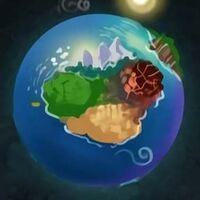 The Emerald Grove is located in the middle of the Hytale world and is where the player spawns; to the south is the Howling Sands and to the north is Borea.[1] The further the player ventures into a zone, the climate gets more extreme and the objectives get more difficult.[1]

Zones continue into the ocean, and if players venture out far enough, they will encounter a sudden drop-off at the edge of each zone that leads to the deep ocean. The deep ocean holds many dangers and rewards for explorers to discover. Beyond the deep ocean is infinite terrain generation.